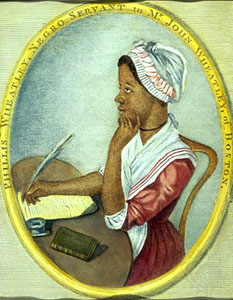 When I teach Wheatley, I tell my students about the question mark that follows her birth year. As a slave, transported from a country along the western coast of Africa to Boston in 1761, basic information regarding the place or year of her birth is lost. It is important to remember the holes in history that often make up a literary tradition.

Phillis Wheatley, arguably one of the most famous female poets in American literature, died on December 5, 1784 in relative obscurity. She was working as a scullery maid, attempting to care for her newborn son while her husband was in debtor’s prison.

I start this blog with the hazy facts of Wheatley’s early life and her harsh death to make a point about what history can forget. These forgotten facts are in many ways key to understanding why women of color are not often present when discussing transatlantic women writers of the long eighteenth century. Remembering and acknowledging what has been lost is always a tricky thing.

As a slave, Wheatley may well have been seen as lucky in her time. She was purchased as a companion for a wealthy Boston woman whose family encouraged her education. By the age of twelve she was fluent in English, Latin, and Greek. She read classic Western literature and more contemporary poetic works, favoring John Milton and Alexander Pope especially. Upon discovering her poetic talents, Wheatley’s masters allowed her to forgo her work in the family home and encouraged her to write. Her first publication, in the Rhode Island Newport Mercury, came at the age of twelve. Her first poem to gain wide public admiration, “On the Death of Rev. Mr. George Whitefield,” was published as a broadside in Boston when she was fifteen. 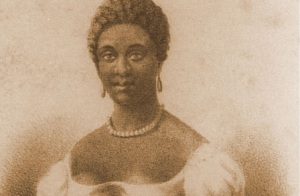 While she gained some fame at a young age, her life was not idyllic. She was still a slave, still accountable to masters and the white literary circles and publishers of New England who refused to print a collection of her work. She was allowed to travel to London with one of the Wheatley family, where her book Poems on Various Subjects, Religious and Moral was published in 1773, to much acclaim on both sides of the Atlantic. While in London she met with Benjamin Franklin. Later, she corresponded with George Washington and was invited to his home. She also met with Thomas Paine during the Revolutionary War and he later published some of her poetry. However, her collection, both upon initial publication and in subsequent printings in the eighteenth century, included introductory materials from her masters and government officials in Boston, who had to authenticate the work of a young enslaved woman of African origins. Even after her literary success and her interactions with powerful political figures, she was only emancipated upon the death of her master in 1778.

In many ways, Wheatley’s work is a study of contradictions. She surely had a personal perspective that made such explorations in poetry possible. Her poems often contain dueling allusions, references and subject matter, artfully connecting the play of socially perceived binaries that made up her life: liberty/slavery, England/America, Christianity/polytheism. She left behind a body of work that reveals the intricacies of the Atlantic World in the long eighteenth century and preserves a unique voice from a time and place that we today often consider a world drenched in black and white social and political concepts.

Wheatley was buried with her infant son, who died days after her. Her grave is now unmarked, and may have been upon her death. She is buried somewhere in Boston. Today, her statue is one of three that makes up the Boston Women’s Memorial in the Commonwealth Avenue Mall. Remembering her contribution now is a good thing, but we must also pause and consider what her life and death would have been like if she had been so publicly remembered in her own time. 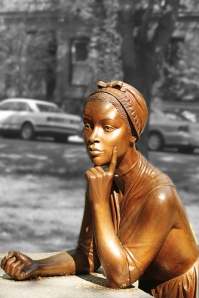 However, dwelling on an imagined history does little to honor a woman who, in her short life, provided insight into the complexity of the past. Two weeks after the bombings at the Boston Marathon, it seems that we should take one Boston woman’s life and death as an example of the way history, tradition, and memorial work. She lived and died in Boston, leaving her mark on a town and a nation. Her memory is both hopeful and sad, and the forgotten parts of history point to the necessity to remember. Contradiction made up such a life, as it does life in general, and we should think on this when faced with life’s tragedies, both large and small. Willing ourselves to remember correctly, to take the good and the bad when viewing our lives and the lives of others, is the best memorial we can erect.

“For thee, Britanna, I resign

To view again her charms divine,

What joy the prospect yields!”

Her most well known poem is “On Being Brought from Africa to America.” I, personal, enjoy her “Hymns,” such as “An Hymn to Humanity,” “An Hymn to the Morning,” and “An Hymn to the Evening.” Her letters are also very much worth the read.

One comment on “Remembering Contradiction: Phillis Wheatley, A Bostonian”

A discussion of interesting books from my current stock A WordPress.com site

Just like the horse whisperer - but with more pages

Everything Early Modern Women: All things to do with the study of early modern women

A Vindication of the Rights of Mary

Welcome to my blog! I am an academic historian of medicine and the body, and 2014 AHRC/BBC 'New Generation Thinker'. Please enjoy and let me know what you think.

Your online source for Jane Austen & her legacy